My polystyrene disco ball construction. **NOTE never use hot glue on styrofoam like I am doing in the picture. It is toxic!  Use staples instead.

2012 I came upon a ridiculous amount of styrofoam (aka polystyrene aka EPS) cups. Read about the dangers of polystyrene and the NY ban here.

I was taking care of my mother after she had cervical spine surgery.   Because of the sutures on her throat, she could not lift her chin to drink a cup of tea in a mug.  With cold drinks she could use a reusable straw, but this would not work with a hot drink.

Due to the strength and pliable nature of the material, solution ended up being styrofoam. She could fold and manipulate the edge to angle a sip. It was lovely to find a way to accommodate her needs but also very heartbreaking. Styrofoam cannot be recycled nor can it be reused. It cannot even be torn up into potting soil as a way to aerate the soil because it leaks toxins and it never breaks down. And the saddest part of all is that they come in packs of gazillion.

I cleaned the dirty styrofoam cups and constructed a sphere – eventual disco ball for  dance night parties using similar directions like these from instructables.

**Actually, as you can see in the above picture,  I used hot glue which is not appropriate for polystyrene since heat causes the EPS chemicals to melt and release carcinogens. DO NOT DO LIKE I DID…  I didn’t know back then what I know now.  Use staples.

I had been inspired by the sphere lamps in Ikea catalogues like these lamps that reminded me of styrofoam but in some ways quite aesthetically appealing.

Despite the hot glue fiasco, the disco ball still stands and hangs in the garage ready to party. It has maintained it’s sphere shape for 7 years. 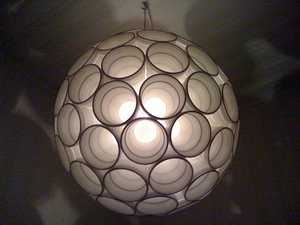 What do you do with styrofoam cups?

A coworker of mine always had one in her car, to use in an emergency pee situation, as she had been stuck in traffic for hours in the past.